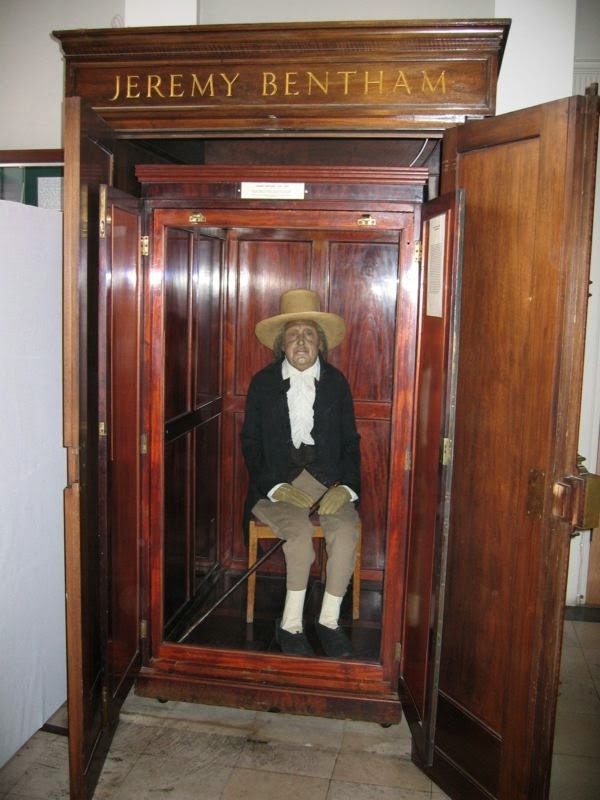 As part of my community service I must polish the ghost of the social reformer Jeremy Bentham who died in 1832.

I am compelled to perform this court-appointed punishment for a period of 8 months. At the end of this time I will be considered rehabilitated, the act of polishing having in some way redeemed my character and righted my errant moral compass.

To aid me in this my task I am given special ghost polish. The polish is made from rendered lemur bones. It is manufactured at a factory in Basildon and is sold in 100 litre drums that I must wheel along the corridors of University College, London, on a metal porters trolley.

Occasionally one of the professors at the college will usher me to one side and quietly enquire as to whether I might be able to siphon off a little of the polish: They are expecting important dinner guests and there is a ghost at home who must be made to look presentable. I am duty-bound to for account every last drop of ghost polish on a paper form, copies of which must be submitted to three different departments. I give none of it away. There are charities that offer ghost polishing services, although these use inferior lemur-friendly polishes made from synthetic compounds.

My supervisor impresses upon me the importance of regularly polishing the ghost of Jeremy Bentham. The more tarnished a ghost becomes the harder they are to clean. Jeremy Bentham's ghost is prone to fidgeting and sometimes wanders off. I follow behind with my squeaky porters trolley and my bouquet of dusters. When I am finished Jeremy Bentham's ghost emits a lustrous golden glow that attracts magpies. He must remain indoors until his aura has sufficiently dimmed.

When Jeremy Bentham died his skeleton was dressed in simple clothing, padded with straw, and placed in a sitting position inside a glass cabinet. His head was mummified according the practices of the indigenous people of New Zealand. The end result was macabre and so a wax head was attached to the body instead.

The ghost of Jeremy Betham is unhappy with this arrangement. He continually petitions me to include the reattachment of his head to his body as an item on the agenda at University College board meetings.

I inform him that I am not an employee of University College and have no influence over the agenda in any of their meetings. I am one of criminal classes convicted by a jury of my peers of selling a counterfeit stegosaurus skeleton to the Royal Society of Junior Palaeontologists.

With the end of my sentence approaching the ghost of Jeremy Bentham becomes agitated. He asks me who will polish him after I am gone. It will probably another community service worker. If there is no-one suitable then maybe somebody who is claiming job seekers' allowance will be forced to polish the ghost of Jeremy Bentham in return for their unemployment benefit, or the job will be offered as an unpaid apprenticeship.

It is the final day of my sentence. Me and the ghost of Jeremy Bentham journey across the road to the park on Gordon Square where we both sit in reflective silence. I watch the ghost of Jeremy Bentham as he is slowly dulled by traffic fumes. Around us the dusk gathers erasing the fine details of London. The end of the day and our time together is sketched out in abstract in the sad evensong of a blackbird, perched in silhouette, high in bare, still branches. 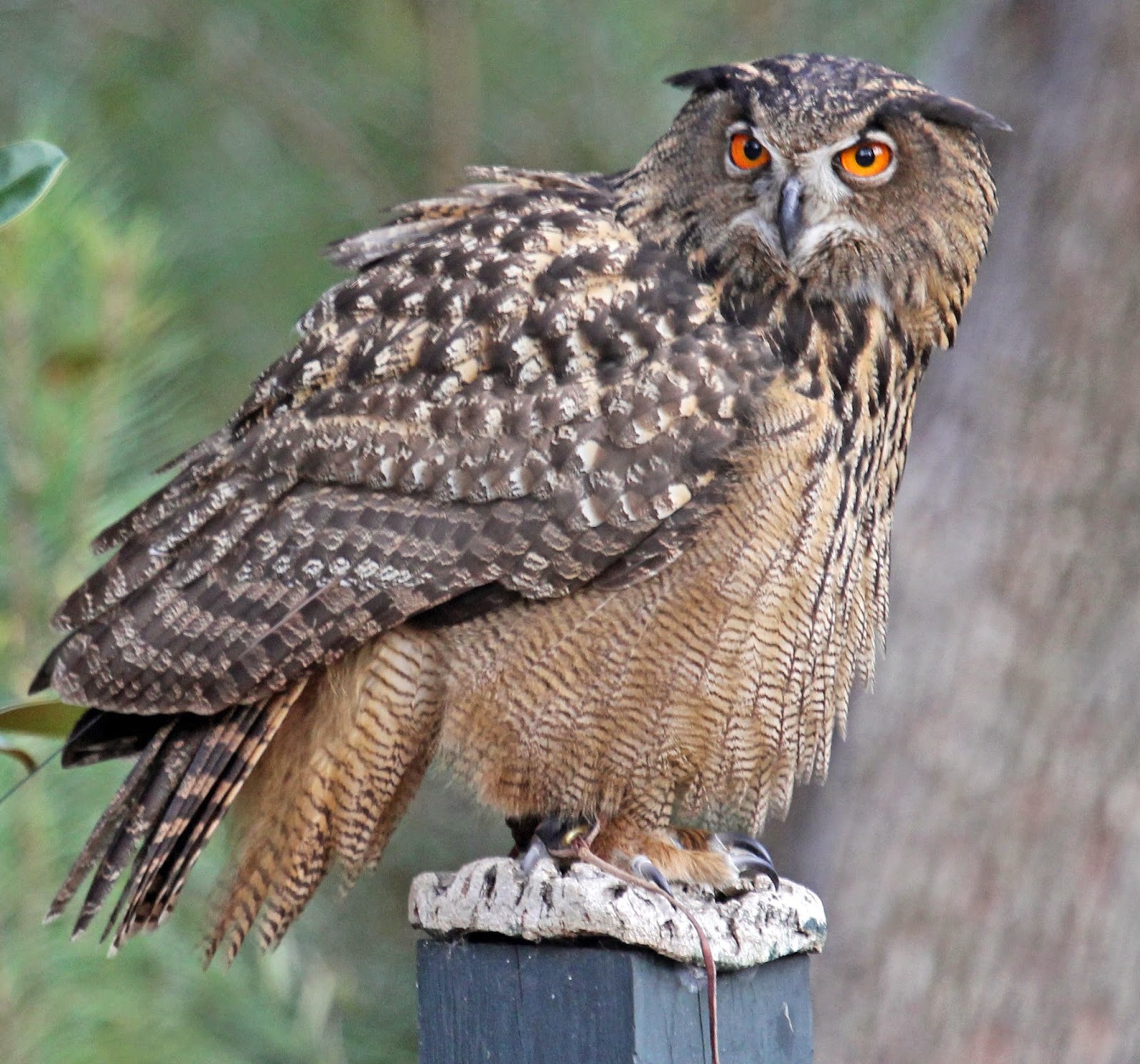 
Last Saturday, after leaving a friend's house in the early hours of the morning, I made a decision that would profoundly alter the direction of my life. Instead of taking my usual route home, following Larchers Lane to where it joins with Willmarck Boulevard, I opted for a bold diagonal course across a chain of neighbouring farmers' fields. This off-road detour would, I calculated, shave 20 minutes from my journey time. If judged correctly, I would emerge further along Willmarck Boulevard, just before the petrol station and the big roundabout.

It turns out that there is a good reason why more residents of Larchers Lane do not take this short cut: Unbeknown to me, as I entered the second of three large fields, I unwittingly strayed into the hunting territory of a Eurasian Eagle Owl. It was this giant bird of prey that descended like a fallen angel from out of the cloudy, starless night sky, its orange eyes burning with infernal hatred as it set about me in a blur of talons and feathers.

In the fraught melee that ensued, I had ample time to reflect upon how the emotional states that one transitions through when attacked by an owl of this particular species, are the mirror image of those described by the Kübler-Ross model charting the five stages of grief:

When the owl first struck I was overwhelmed by strong feelings of DENIAL. During the opening seconds of the assault I found it hard to admit that I was even being attacked! Instead I rationalised that the wind must have caught the hem of my coat and blown it over head.

Even after I had finally come to terms with the stark truth - that I was being savaged by some kind of large, predatory bird with excellent night vision - I was unable to accept that my assailant was a Eurasian Eagle Owl. I refused to believe the living evidence before my eyes, that was hell-bent on raking deep bloody furrows into my face. Instead I conjectured that the south of England lay outside the normal range for an animal that is more commonly sighted on continental Europe, and that my attacker must therefore be another large bird – a nocturnal seagull, perhaps.

Hot on the heels of denial came ANGER. Over the course of four decades I have donated small sums of money, amounting in total to 10 pounds and 43 pence, to The Owl Enhancement Trust – a charity that is run by owls for owls. Donations from the public are used to promote issues affecting owls and to provide owl-friendly habitats, for example by constructing more derelict barns to encourage the spread of barn owls across the UK.

Many is the time that I have spoken favourably of both eagles and owls in public. Furthermore I have always openly challenged those who attempt to spread untruths or incite violence against these birds of prey.

Yet now, in spite of my philanthropy, I was being attacked like a common vole, under the cover of darkness, by an eagle/owl hybrid!

As my anger subsided and it occurred that I might very well come off second best in the struggle that was unfolding, I resorted to BARGAINING. I wrenched from the twisted pocket of my jeans a mixed offering composed of small change, faded milk-chocolate M&Ms, and used tissues. I cast these down onto the bare earth in the hope that they would provide adequate compensation for whatever transgression I had committed.

When this desperate attempt at mediation proved futile I lost heart and slipped into a DEPRESSION, where I recalled the lyrics of a song by Morrissey titled 'Charles Hawtrey is Snatched from the Set of Carry On Doctor by a Giant Tawny Owl'.

In this despondent state of mind, where the embrace of death felt preferable to the reality of having my flesh gouged by the sharpened talons of an enraged owl, I almost gave up. It would have surely been the end had ACCEPTANCE not come riding out of my existential darkness to save me. It was in this moment of clarity that I thought:

'I am being attacked by a Eurasian Eagle Owl. I am not okay with this, but it is happening.'

As I spoke these words to myself something changed: Our physical bodies seemed to fall away and the owl and I were unified as a single entity; one that was composed entirely of light and energy. I knew the personal history of my strigiforme assailant and the history all owls. Likewise my attacker knew my past and the past of all humans. Together we ascended through the earth's atmosphere, out into the solar system and beyond into the vast and unfathomable cosmos, where we now dwell, immortal and omnipotent, presiding over the secrets of the universe like a god.
Posted by backwards7 at 05:32 No comments: