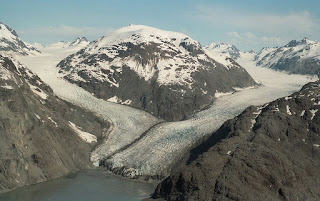 In the early 1990s, a brood of Scottish glaciers advanced south across the border into England, their relentless forward creep bolstered by a current of cold air emanating from a new wave of cool Glaswegian bands; Primal Scream, Del Amitri, and Deacon Blue, to name but three.

The glaciers were immediately a point of interest to an upcoming generation of bands signed to independent labels, who were fixated on the sedimentary deposits left behind by the icy behemoths.

One of the first bands to visit the glaciers were the bi-curious-skag-glam ensemble, Suede.

“We drove to the nearest glacier in Mat Osman's Renault. Brett (lead singer, Brett Anderson) sustained serious frostbite after he pressed his buttocks against the ice, with just a thin layer of Terylene to protect his bare flesh. At early Suede shows, he was continually slapping his own arse in an attempt to drive warmth back into his butt cheeks and rekindle the circulation.”

Another band to take advantage of the invading glaciers were Blur, who were on the back foot following an indifferent reception to their debut LP, Leisure. One draft of the icy water left frontman, Damon Albarn, talking like a cockney whelk vendor for years afterwards.

As Britpop gathered momentum, the glaciers were embraced, sometimes literally, by a second wave of artists, among them Gene lead singer, Martin Rossiter:

“Beside the glowing display of a vandalised cash machine, I tenderly kissed the finger of a Scottish glacier that had extended some way along a rowdy provincial high-street. It made me question my sexuality for years after, and informed our best records.”

Even seasoned old timers were not immune to the charms of the glaciers. Pulp frontman, Jarvis Cocker claimed to have written Disco 2000 after imbibing the cold water, filtered through a cardigan that had once belonged to an unrequited love, while mentally picturing three flying mallard duck ornaments, scaling the floral wallpaper of a front room in a 1960s terrace.

Not everyone welcomed the Scottish invasion. Liam Gallagher of Oasis notoriety berated an encroaching glacier as “a fookin' ice cube in a kilt that doesn't know a single Beatles song” and offered to fight it. Years later his brother, Noel, admitted to looking at photos of the glaciers online, but stopped short of visiting in person, fearing that any spark of inspiration might increase his band's plodding tempo or somehow harm his ability to repurpose tunes written by other people.

Others were more idealogical in their objections, as Peter Kimpton, formerly of Hut records, recounts:

“Luke Haines, then of The Auteurs, took to the pages of the NME to praise the 'superior' European glaciers, which he claimed were dyed red with the blood of radical Marxist terrorist groups who had operated during the 1970s. He once told me that the red ice was a cultural incendiary that had inspired pop revolutionaries such as Kim Wilde, Jaki Graham and Bananarama to subvert the pop landscape of the 1980s, though I am not sure this is strictly true. Ultimately, Luke's refusal to embrace the cool Scottish glaciers is what kept his Unsolved Child Murder EP from topping the charts and its parent album, After Murder Park, from cleaning up at the Brit Awards that year. Deep down I think he still regrets his decision.”

As Britpop ambled towards a premature death in the snug bar of dismal Camden drinking dive, The Good Mixer, a slew of opportunist nearly-bands, among them Menswear, Heavy Stereo and Fluffy, who couldn't be arsed to visit the glaciers, instead consumed Scottish ice shavings diluted in north London tap water. The impact this had on the quality of the music was predictably disastrous.

By the late 1990s, the glaciers that had defined a musical generation were forced into a timid retreat; the likes of Belle and Sebastian and The Yummy Fur causing the proud Celtic ice to melt from embarrassment into fey streams that were later culverted in pipes made from novelty hair-slides and twee friendship bracelets.

Matt, who was the drummer in Dodgy, or possibly Gene, recalls:

“At its peak Britpop embodied the pristine clarity that one sees in a top a quality lager - the kind where they stick a wedge of lime in the bottle neck. At the end, the music possessed the stodgy consistency of a fry-up. It still looked good on paper, or if you were in A&R for a major record company and had just snorted a massive line of coke, but it caused a blockage in the second-hand racks of record shops that still hasn't been cleared.

“Fortunately I invested all my royalties in red Saharan sand, which is going to inspire the next big music scene. I've got three tons of it stored in a lock up in Tooting if you want to buy any.”