A couple of weeks ago I was visited by my nephew, Stellan. At the age of three he is already a competent and inventive gunsmith. Over the course of his stay he produced an impressive arsenal of Lego firearms that challenged my many deeply-held notions of what a gun can be.

While some of Stellan's creations have been lost to the ages, broken up on the unforgiving jagged tides of the big box where we keep all the Lego, a few examples of his work do still survive.

Below I examine this extraordinary cache of weaponry, made by a young man who knows in his heart that the most efficient method of inflicting injury with Lego is to leave individual bricks scattered where they will be trodden on by bare feet, but whose aesthetic sense intuitively reaches towards something more beautiful and refined. 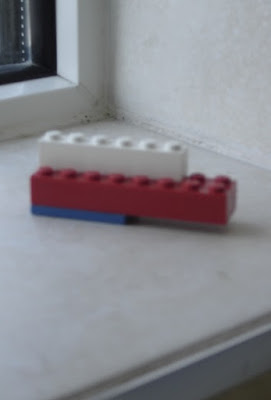 (1) The diminutive aspect of this simple weapon, with its three non-moving parts, begs the question: Is this a firearm at all? Stellan, its creator, claimed that he “couldn't remember,” before shooting me with it from the cover of the kitchen doorway.

The bulk of this piece and the absence of a handgrip leads me to speculate that it may be a shotgun of some sort, with an external magazine incorporated into the 6-studded white brick that rests atop the barrel.

It is possible that that slender blue tile could be repositioned so that it protrudes from the rear of the long red brick to create a shoulder stock. One wonders whether this delicate plastic slate, attached to the body of the weapon by only one or two pairs of studs would withstand the recoil associated with a shotgun, without detaching and potentially injuring the shooter. 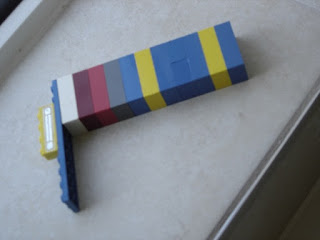 A bold fusion of the brash and the elegant, this high-calibre handgun would have blended seamlessly into the shop-soiled Big Apple of Clint Eastwood's Dirty Harry films.

A flimsy handgrip may lead to difficulties holding the weapon steady during firing.

The 1970s car headlamps and radiator grill bulking out the butt of the gun, while of little practical purpose, provide a retro flourish – a nod of the head to the violent cop films of the 1970s and early 1980s that inspired this fearsome piece.

Here we see a common motif in all of Stellan's designs; the concealed trigger which is incorporated into the grip. 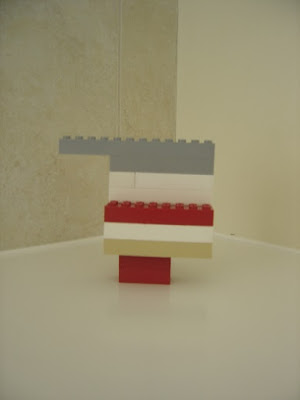 (3) This stocky sub-machine-gun, reminiscent of the KRISS Vector SMG, incorporates an extended magazine within its bulky and protruding handgrip. However, what this misshapen weapon gains in ammo capacity it loses in ease of use.

I initially mistook this portable, rapid-fire, bringer of death for a penguin, earning me the ire of its creator. 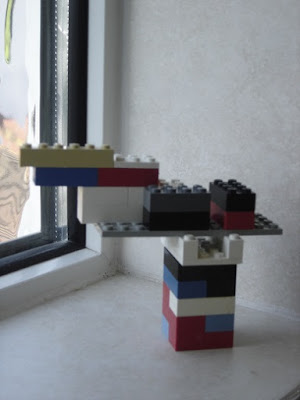 (4) Another sub-machine-gun. A mysterious gap between the handgrip, where the magazine is presumably housed, and the barrel, raises the pertinent issue of how ammunition enters the firing chamber. One tantalizing possibility is that this tunnel accommodates a belt feed, allowing a user to fire on full-automatic, while drawing from a pair of bandoleers, criss-crossing his or her bare, sweaty chest, like a pair of brass anacondas.

The unusual stair-casing design of the barrel forces the bullet to climb a short flight of internal steps prior to exiting through the muzzle. This results in fitter ammunition, capable of travelling at greater speeds over longer distances. 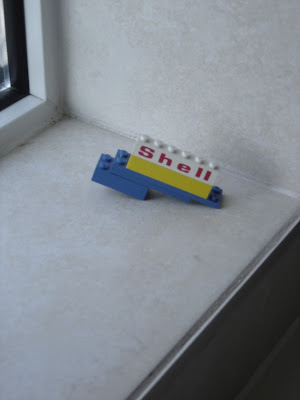 (5) Whether you have just been caught cheating at poker in a late 18th century El Paso saloon bar, or are simply hoping to assassinate the 16th President of the United States of America during a visit to the theatre, this handsome derringer, sponsored by the Shell Oil company, will more than likely meet your requirements. 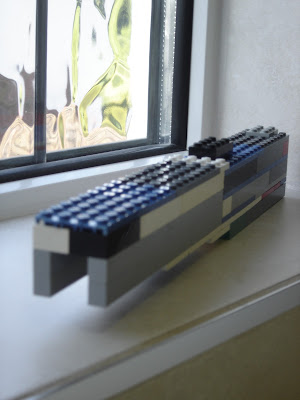 (6) Holy fucking crap! Is that a railgun?

Why yes, now that you mention it Edith, it is a railgun. Capable of magnetically accelerating a Lego brick along its smooth-bore, 1.5cm barrel faster than you can utter the words: “Oh fuck.”

“When you absolutely, positively got to kill every motherfucker in the room, accept no substitutes.”

After Stellan returned home to Preston, I dismantled his Lego guns and fashioned the remains into this monument to peace. 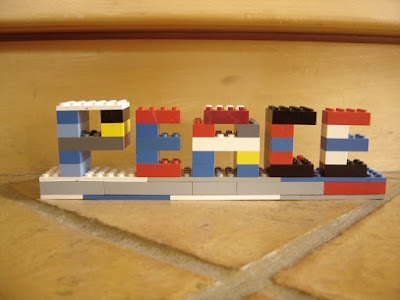